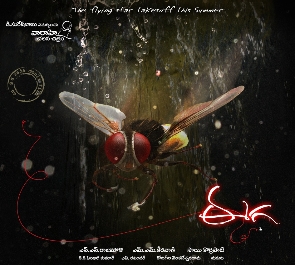 Eega,one of the most awaited Telugu movies of the year for the movie buffs and the most hopeful adventure of SS Rajamouli, landed merely on the grand opening scale of any other Star hero’s flick. Besides drawing crowds on more a childhood-fancy-dream-like storyline, Eega puts the director Rajamouli’s gloryline in a new freeway on full throttle. The director’s ability of not just visualization but also narration to almost perfect sharpness for the Tollywood, has helped the industry to conceive a high-budgeted experiment in success. Putting apart the monetary aspect, the film “raises the bar” for the further graphical wonders in line in the industry. And by advertising the mascot and the storyline well ahead of the movie’s been scheduled for release, the team did a hype extension that can further amass collections.

The plot opens where Nani falls in love with the-girl-next-door-kind Samantha, around whom Sudeep’s thirst also orbits.  From there on, as the story was revealed already, Sudeep kills Nani, Nani reborn as Eega to take revenge, a thoroughly commercial formula. Now, the graphics, the imagination of the director, the attention to detail in converging the story down with the female lead fall in as highlights for ‘Eega’. Nani’s screen-time is hardly around a quarter a clock. Background Music by Keeravani, ‘My name is Nani’ song and the background score match the pace, wherein Cinematography by Senthil Kumar is extremely justified. Thagubothu Ramesh has done his job. Last but not the least, Sudeep’s performance has been the ‘cherry on the cake’ throughout the film.

Now the bets is on how SS Rajamouli’s Eega can fare amidst slated releases of Julayi & Oo Kodathara Ulikki Padathara. One can witness the entire technical team’s talent and hard work. All things apart, Go, get a ticket and have fun with Rajamouli’s Eega. The brand stamp of Rajamouli, continues to resound.