UPDATE: Julayi release date postponed to August 9th 2012. Stylish Star Allu Arjun’s Julayi Releasing on August 9th About 1600 Screens In 2 Languages 4 States.
Allu Arjun is back with Julayi, the movie is slated to release on July 13th,2012. The main plus point of this Julayi is the Trivikram brand. Trivikram Srinivas is well known for his humorous punch dialogues. This is going to be the first film in 2012 for Allu Arjun and also the first Telugu film for Ileana in 2012, as her last direct Telugu movie was Nenu Naa Raakshasi back in 2011. 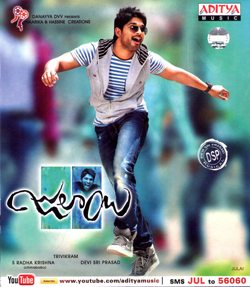 Music was composed by Devi Sri Prasad, and the song O Madhu was played on BBC Asian Network making it the first Telugu track to ever playlisted on BBC. Allu Arjun’s dance moves is always a plus point for his movies. Check the trailer below.